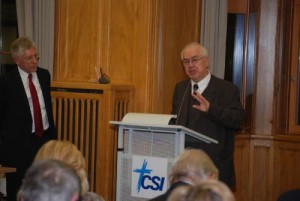 Professor Bassam Tibi warned of a “de-Christianization” of the Middle East and criticized U.S. policy toward the region.

/ — “The so-called Arab Spring has turned out to be a deadly winter,” Professor Bassam Tibi said in Zurich Tuesday at a lecture hosted by Christian Solidarity International.  Tibi’s lecture was entitled, “The Uprisings in the Middle East and the Fate of Religious Minorities in a Sharia State: U.S. Support for Islamist Governments.”

“Religionization” of the Arab uprisings
According to Tibi, Islamist movements in the Middle East succeeded in hijacking and “religionizing” the uprisings in the region. The problem was compounded, Tibi said, because “the present U.S. government thinks it is possible to cooperate with peaceful Islamists against jihadist Islamists, and that the best partner for this is the Muslim Brotherhood.”

De-Christianization of the Middle East
“In the Middle East, we can clearly witness a process of de-Christianization,” Tibi stated. Not only is this the case in Iraq, where more than half of the Christian population had to flee the country in the aftermath of the U.S. invasion, but also in Egypt, Lebanon, and Syria, Tibi’s homeland.

Tibi argued that the political interpretation of Islamic Sharia law, as introduced by Hassan al-Banna, the founder of the Muslim Brotherhood, and later appropriated and radicalized by numerous Islamic movements, leaves no room for Christians, Jews and other religious minorities. Radical Islamists consider such minorities to be kuffar or infidels.

As a very recent example dramatically illustrating this, Tibi mentioned the pogroms in Egypt in August, in which over 80 churches were burned down and numerous church installations, homes and shops belonging to Christians destroyed. “The fate of religious minorities in the Middle East is not promising, to say the least,” Tibi said.

No chance for democratization in a Sharia state
According to Tibi, Islam as a faith must be distinguished from Islamism, a political ideology. The crisis in the Middle East, Tibi stressed, was not rooted in religion. Enormous demographic growth, with which the economic development of the region could not compete, had brought forth a generation which saw no opportunities for the future. Islamist movements spread the slogan “Islam is the solution” as an answer to this problem.

Tibi strongly criticized current U.S. policy in the Middle East, describing it as “supporting the rule of Islamists” such as the Muslim Brotherhood in Egypt “in the name of security and fighting terrorism.” Rather than supporting Islamist rule, Tibi argued that the U.S. andEurope should “prevent the empowerment of Islamists, because when they come to power, it will be the end of democracy.”

Bassam Tibi is a Professor Emeritus of International Relations at the University of Goettingen, and the author most recently of The Sharia State: Arab Spring and Democratization (Routledge, 2013).

In response to increasing violence against Christians and other religious minorities in the Middle East, Christian Solidarity International has issued an Alert for the Prevention of Genocide.