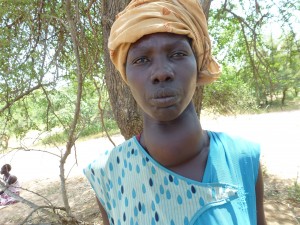 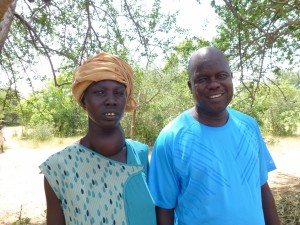 CSI was able to liberate Abuk Atak Athian, 37, from slavery in Islamist North Sudan in September 2014. During her 16 years in slavery, she was never allowed to see a doctor – even as she began suffering from a terrible goiter on her throat.

Thanks to CSI’s donors, we have now taken her to Nairobi, Kenya, to receive medical treatment. Our staff reports, “Abuk had a very successful surgery on her neck and the goiter has been removed. She also had ear surgery to remove something. She is all done and she will go back to South Sudan soon.”

Thank you for making this healing possible!

I am from Marialbai village. I used to live with my parents and my seven siblings.

One day I went out to the nearby forest to collect wood. Suddenly, I heard a lot of gunshots and many noises. I ran back to my house. I saw many Arabs coming on horses and on donkeys. When I got home, one of the Arabs grabbed me and pushed me down. I saw the bodies of my father, my mother and my seven siblings. They all were shot dead. I don’t know what happened, or if my father and brothers were able to fight back before they were killed.

The Arabs made me walk with them toward north Sudan. There were other Dinkas with us who were also captured. The raiders killed three captured men when they refused to carry heavy things for Arabs.Three Arab men raped me also. At night the Arabs would eat good food. We were given sorghum grain to boil and eat.

When we arrived in Pola in North Sudan, we were divided. A man named Ali took me with him. I used to work for long hours in his house, cleaning dishes, washing clothes and looking after goats. They treated me very badly. They called me “jengai,” “dirty” and “slave.” His wives beat me if I did not do a good job. His older children called me dirty. They made me sleep with donkeys and eat leftover food.

Ali gave me to another Arab who was very poor. I have one child with him, a baby girl. My child was not allowed to stay with me.

I became sick in captivity and my throat start growing big. I have not seen any doctor about it.

Some other Dinka slaves told me about the slave retriever. I escaped at night and met with him at a nearby village. He asked me why I was like this. I told him I had been enslaved by the Arabs. He took me with him, put me on a truck and took me to a city. From there, we walked on foot to South Sudan. The slave retriever gave us food on the way to South Sudan.

I am very happy to be in South Sudan. I feel very bad about my child I left in North Sudan.