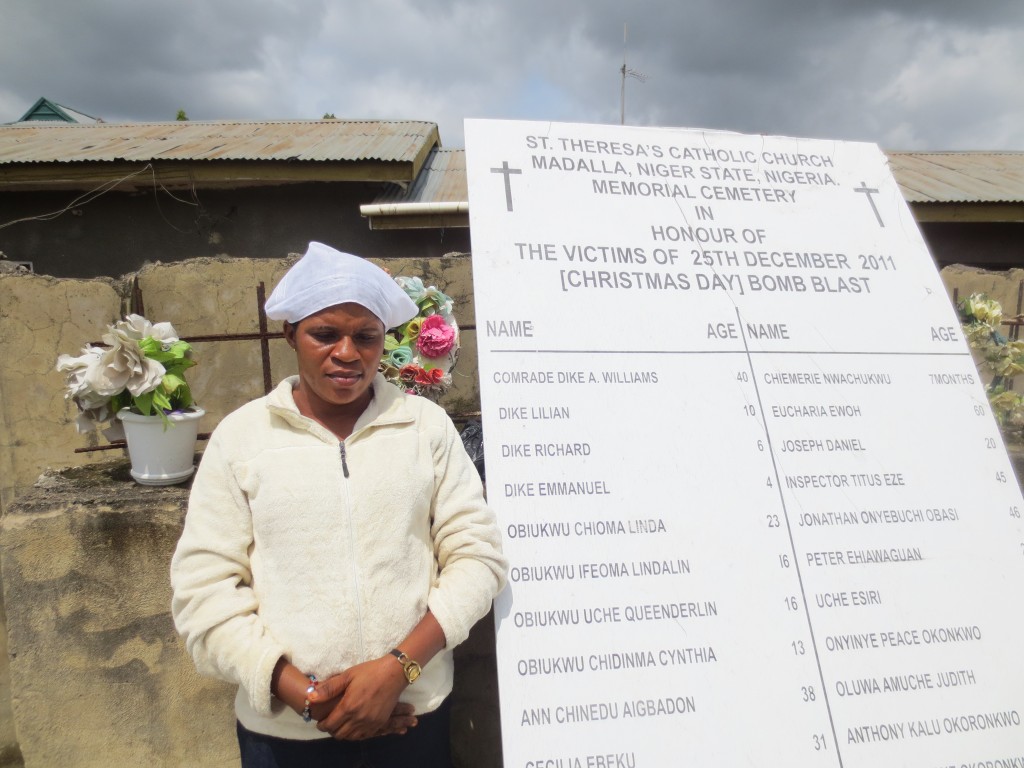 Standing next to a makeshift memorial plaque outside St. Theresa’s Catholic Church in Madella, Nigeria, Chioma Dike pointed to the names of the family members she had lost.

On December 25, 2011, as churchgoers were leaving the early Christmas mass at St. Theresa’s, a car pulled in toward the church.  As the security guard assigned to the church walked up to the driver to find out why he was arriving so late, the car exploded.  43 people were killed, including 27 members of the church.  Chioma’s family, who had gone to church without her, was nearly wiped out.  Only two of her children survived.

Since January 2012, the Muslim extremist group Boko Haram has carried out over 80 attacks on Nigeria’s Christians, killing hundreds.  The attack on St. Theresa’s was unusual only in that it occurred in a town near Nigeria’s capital city.  In Nigeria’s twelve northern states, where Islamic shari’a law is the law of the land, brutal attacks on Christians have become routine.

A CSI team was in Nigeria in September to meet with the victims of Boko Haram’s terror, and find ways to help.  After visiting St. Theresa’s, the team headed to Nigeria’s majority-Christian southeast region, where thousands of Christians have fled from the north to seek refuge.

At one primary school the team visited, 120 of the 320 young students were refugees from the north.  The local parish is struggling to provide them with what they need to continue their schooling.  At a nearby orphanage, the team met four-year-old twins, Felicity and Perpetua, whose parents were shot to death by Boko Haram, as well as two-year-old John, who lost his mother in a separate attack.

One refugee woman the team met described how her entire neighborhood had fled in terror when the word spread one morning: “Boko Haram is coming.” Another broke down sobbing when asked if her husband and four children had accompanied her when she came to the south.  They had not; they were all killed in a bombing in Borno State last September.

“There is no hope of staying in the north,” one woman said. “Every day, we were living in fear there.”

CSI is providing aid to the victims of the bombing at St. Theresa’s.  Many of them are still in desperate need of medical care for the wounds they received in the bombing, and the government stopped paying for their treatment months ago.  Many others, like Mrs. Dike, lost family members who used to support them, or had their finances drained during their recovery period, and simply need help putting their lives and small businesses back together.

CSI is also supporting several projects to help refugees from the north, including the primary school and orphanage serving children displaced by Boko Haram’s terror.  With support from our donors, we will provide good food, medical care, and schooling for these children.

Asked why she thinks Boko Haram killed her family, Mrs. Dike said, “All of this belongs to God.  I pray to God to forgive them.  They don’t know what they are doing.” She still attends the church where she lost her family. “I cannot run away from my church,” she said.

Helen, a mother of two who survived the attack at St. Theresa’s with severe shrapnel wounds, told the CSI team, “This is the first time we see people who come to share in our pains, and people who ready to help us.  God bless you, and God will replenish from wherever this help is coming from.”