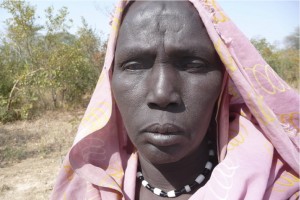 “Mr. Chairman, may I introduce you to Achol Yum Deng?”

Most of Sudan‘s slaves were captured by government backed armed forces in southern Sudan during the late North-South civil war (1983-2005). Others have been enslaved by the so-called janjaweed in Darfur and by the Lord’s Resistance Army in Equatoria. Eibner noted that the Islamist-dominated government in Khartoum bears primary responsibility, since it has used slave raiding “as an instrument of collective punishment in a declared jihad against non-submissive Black African communities.”

Eibner said that it would be a mistake for American lawmakers to turn a blind eye to cases of slavery that have been borne out of Sudan‘s ongoing “War of Visions” — a conflict arising from a collision between Arab/Muslim and Black African Christian and traditionalist cultural perceptions of the world.

“Unless the American government, together with the international community, addresses squarely the cultural and religious roots of Sudanese slavery, it will have failed to address the sources of the ongoing conflict,” Eibner said.

A U.S. government-sponsored report released in 2002 by the International Eminent Persons’ Group on Slavery and Forced Servitude found that ending slavery in Sudan would require “substantial, long-term, carefully conceived and, above all, rigorously monitored” assistance from the international community. Eibner expressed deep regret that this assistance had not been forthcoming.

As long ago as 2000, Eibner recalled, U.S. Ambassador to the UN Susan Rice came face to face with liberated slaves in Sudan and pledged that the United States would work tirelessly to stamp out slavery in Sudan.  Eibner urged the U.S. government to act on Ambassador Rice’s pledge by implementing the unfulfilled recommendations of the Eminent Persons’ Group, including the establishment of:

Eibner concluded by observing: “Failure to eradicate slavery — with all its overtones of racism and religious bigotry — will leave in Sudan a deadly cancer, destroying possibilities of reconciliation, and undermining chances of sustainable peace and stability for the new state of South Sudan.”

Eibner has frequently traveled to Sudan since 1992 on CSI missions to document slavery and help facilitate the liberation of slaves.