Dr. John Eibner, the CEO of Christian Solidarity International
(CSI-USA), traveled to Iraq at the end of December 2017 to speak with
government officials and to visit the areas formerly under Islamic
State control. The visit was undertaken in collaboration with the
Hammurabi Human Rights Organization, an indigenous NGO.

The following interview was made by prominent Iraqi journalist Adel
Saad, and was translated into Arabic and published on January 9,
2018, in az-Zaman, an influential Iraqi newspaper.

In the interview, Eibner evaluates the current situation and
prospects for the future. Key points are: 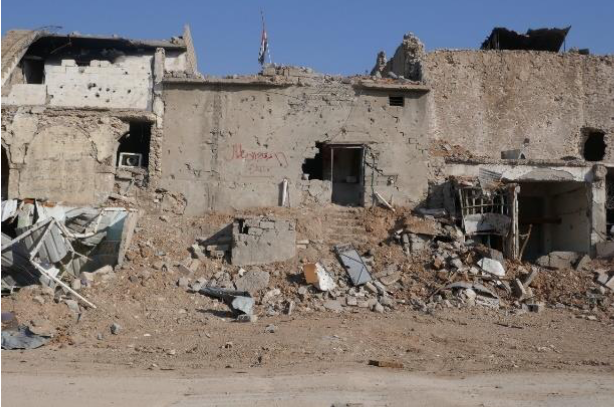 AZ: You have visited the Nineveh Province, which was conquered by the
Islamic State in the summer of 2014. Hundreds of thousands fled. By
the end of 2016, large swathes of territory were retaken. Have the
displaced returned to their homes?

JE: The military defeat of Daesh and the reconquest of Nineveh by the
Iraqi Army, together with allied state and non-state actors, has
produced vastly improved security in Nineveh Province. As fragile as
that security may be, the most fundamental pre-condition for
reconstruction in a stable environment is now in place.

In the predominantly Christian towns of Hamdaniya, Keremles and
Teleskuf, I have seen displaced families returning to their homes and
the beginning of repair and reconstruction, normally with the
assistance of church agencies, NGOs and the Hungarian government.

But many, perhaps the majority, will not return. A large percentage
of the population of these towns is now abroad – in Europe, North
America and Australia – and will never return to live as permanent
residents. Others will stay in the KRG or in Baghdad. Among those
that have returned to their homes, it can be expected that some will
repair their homes to sell them, and then leave Iraq in the event
they find a way to be resettled in the West.

Life will never be the same in these towns as it was before Daesh
overran them in 2014. But if there is the prospect of long-term
security in Nineveh and the broader region, a substantial portion of
the Christian population is likely to remain. When I speak of
security, I do not mean only the absence of violence. I also mean the
absence of efforts to effect further demographic change. The presence
of so many different armed forces in this so-called disputed area –
each with a different political master, each with an interest in
demographic change – does not inspire confidence in the prospects for
security. We have to bear in mind that the coercive demographic
change in Iraq has a long history. It did not begin with Daesh. The
challenge will be to bury this tradition together with Daesh.

AZ: You have also visited Mosul. How is the situation there?

JE: Mosul reminds me of the apocalyptic scenes that I’ve witnessed in
Aleppo, Homs and parts of Damascus. While parts of Mosul are largely
intact and functional, the old city is in ruins. It is hard to see
that it will ever be restored like similarly destroyed German cities
were after WWII.

Mosul is at the moment secure. Daesh is gone, but so is a large part
of the population, including many Daesh sympathizers. Those who
remain are largely traumatized. No serious effort at repair, let
alone reconstruction, has yet started in the old city. It is
virtually a ghost town, apart from the militias that provide local
security and a few people trying to clear their homes of rubble.

I saw at least half a dozen decaying bodies of Daesh fighters in the
ruins of church buildings. That they have been left lying there since
the destructive liberation of the old city last summer speaks volumes
about where the Iraqi Government and its coalition partners are in
the process of normalization. It also speaks volumes about the low
priority the authorities give to encouraging the city’s displaced
Christians to believe that they have a future there. It looks like
the existence of Mosul’s ancient Christian community may now be at an
end.

Whether the many displaced Sunnis will be able to return is also
uncertain, even if they have a home to go to. The authorities in
Baghdad are aware of the warm welcome Daesh received in 2014, and
that while Daesh as an organization may be defeated, its ideology
still strikes a chord of sympathy with a significant part of the
population. Some young men from the city, including an Sunni imam,
told me that they thought that about 10% of Mosul’s population still
carries the Daesh ideology in their hearts and minds. This is a
minority, but it represents a large number of people in a city of two
million people, and is a potential source of insecurity for the
future.

AZ: The Yezidis are a religious minority which suffered heavily at
the hands of the Islamic State. How is their situation today?

JE: I did not go to Sinjar, but I spoke with Yezidis. I was left with
the impression that the situation there is much more difficult than
in the predominantly Christian towns and villages. A variety of armed
forces with different political agendas compete with each other. None
of them have Yezidi interests at heart. Few of the displaced Yezidis
have returned to their homes. Repair and reconstruction have, I am
told, scarcely started.

The Yezidi community is greatly traumatized. It seems that thousands
of captured Yezidi woman and children are still missing. Some suspect
that a good number of the missing children were “adopted” and
Islamized, and are now in the camps for the displaced Sunnis from
Mosul. This merits investigation.

AZ: Which steps are now needed to bring peace and order to Iraq?

JE: The defeat of Daesh provides a golden opportunity for the
inauguration of a new era of stability in which all Iraqis, whatever
their religious and cultural identity, can live in peace and dignity
in their own county. This will only happen, however, if the Iraqi
state is strengthened and respects the principle of common, equal
citizenship and international norms of human rights.

But this alone will not be enough. Foreign powers will have to forego
regime change policies, and desist from using Iraq and Syria as a
battlefield for proxy wars. They will instead have to move quickly
with substantial investment in reconstruction. If these difficult
conditions are met, Nineveh and the rest of the country will have a
chance. But if not, it is likely that the relative calm
that Iraq is now experiencing will prove to be a lull before the next
storm.

AZ: You have met with a number of government officials. Have you
found them willing to cooperate with CSI and other organizations?

JE: I was very courteously received by government officials in
Baghdad. We were able to speak frankly and constructively with each
other. The main issues on the agenda were related to the situation of
minorities. One of them was state sponsorship of a transparent
conference to ascertain the views of minorities in Nineveh. The
conference should have taken place months ago as a part of the
central government’s reconciliation program. But it is stalled.

I departed some of the meetings convinced that senior officials
regard such a conference as vital to the process of national
stabilization. But I left some with the impression that working with
the minorities to find a common vision for the future was not a very
high priority. Hopefully, the Prime Minister will soon be able to
give his attention to the issue, and make it clear to all in
government that addressing minority issues in a constructive and
energetic way is not only in the interest of the minorities, but is
in the national interest, especially as so many of the minorities
live in “disputed” areas. These territorial disputes within Iraq must
come to an end.

AZ: You have been traveling for CSI in many countries. What is your
opinion of aid programs in general and in Iraq in particular?

JE: It is not possible to generalize about relief programs. It is
clear that some are crucial to saving lives, improving social
conditions, and helping states fulfill basic responsibilities to
their citizens. But we all know that aid programs in Iraq and
elsewhere in the world are not immune from the corruption and
inefficiency that plague all other sectors of government and society.
The weaker the state, the more scope there is for corruption and
inefficiency. Since the onset of “Operation Iraqi Freedom,” the Iraqi
state has been extremely weak. There are signs that the state is now
strengthening, and we can only hope that this process gains pace.

AZ: Often there are political goals behind foreign human rights and
humanitarian programs. What can be done to prevent this?

JE: Most major humanitarian relief efforts are funded by states, or
foundations that have common interests with states. From the point of
view of state donors, humanitarian aid is generally viewed as an
instrument of soft power. It is inevitable that they come with a
political agenda. Some political agendas are transparent and are in
harmony with the aspirations of the recipients of aid. Some are not.
In the worst case, states use NGOs as a cover for covert operations.
Such practices do a great disservice to NGOs that are a genuine
reflection of civil society, for they result in a general suspicion
of NGOs.

AZ: The Hammurabi Human Rights Organization (HHRO) is CSI’s partner
in Iraq. Are you satisfied with this cooperation?

JE: I am very satisfied with CSI’s relationship with HHRO. Our
partner is a largely volunteer organization, whose ethos and
practices correspond closely to CSI’s. All of CSI’s activity in Iraq
is conducted through the HHRO. CSI has no office, nor staff
permanently based in Iraq. I am impressed by the warm reception that
I witness from all segments of the Iraqi population when traveling
with HHRO personnel throughout the country.