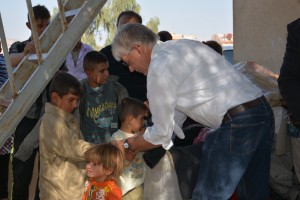 Dr. John Eibner, the CEO of CSI-USA, and the director of CSI’s Middle East Program, talks to the Wall Street Journal about the situation in the Middle East:

John Eibner, the CEO of Christian Solidarity International-USA, has seen the bodies that many of his coreligionists in the West might prefer not to think about. “I don’t like to loosely use the term genocide,” he says, “but there’s no question about it—extensive religious cleansing threatens the entire Middle Eastern Christian community.” There is “a huge swath of territory,” he notes, from “northwestern Syria all the way to Baghdad, that is religiously cleansed.”

During 20 trips to Iraq and five to Syria, from which he returned last week, Mr. Eibner has witnessed firsthand the decimation—and he knows the survivors. In August last year, Eibner touched down in Dohuk, a provincial capital in Iraqi Kurdistan that became a haven for Christians and Yazidis—a minority of ethnic Kurds who adhere to a pre-Islamic religion—fleeing Islamic State’s advance. Several hundred thousand people, he says, “escaped just in the nick of time.”

Why, with Islamic State inflicting such mass murder and suffering, has the West largely failed to intervene? Christian Solidarity International-USA, detecting mounting threats to Middle East Christians, raised a genocide warning four years ago. “We published; we went to Washington; we lobbied; we testified in front of Congress,” Mr. Eibner says. “We know Washington is aware of the realities.”