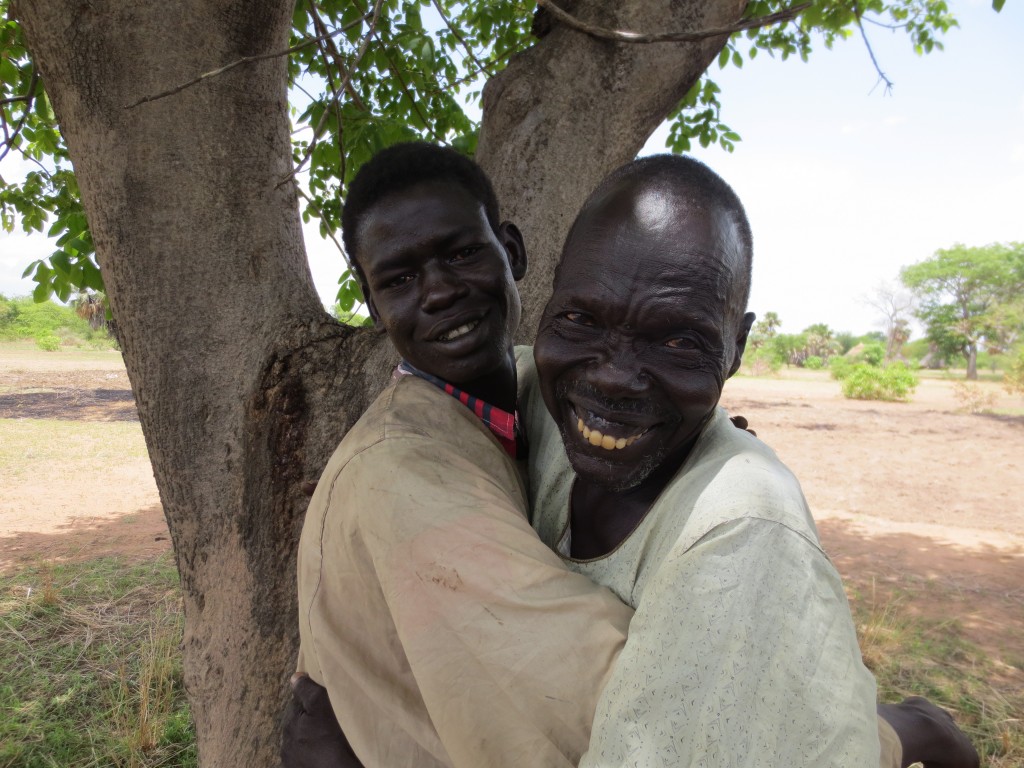 Michael Yom Malit was rescued from slavery in North Sudan through CSI’s underground slave liberation network in 2008.  In February 2014, we visited him at the church where he serves as a catechist, and he told us his story:

I was a slave in Da’en, in Darfur, for many, many years.  My wife and our six children were also enslaved, and I was separated from them. I have been told that they are now in Makarba, and that some of my daughters have been forced to marry to Arab men.  Only with the power of God will they ever come back.

In the North, I was called Mohammed Abd al-Hadi.  I was forced to pray like a Muslim and fast during Ramadan.  Once, my master took me and some of his other slaves in a car to a farm to work.  The car was in an accident, and I lost my right index finger.  Nothing was done to help me with the wound.  I was just a slave.

In slavery, I was married to a slave woman.  We had four children.  My wife had some relatives living in the North as internally-displaced, but free, people.  One of my sons escaped from slavery and went to live with his mother’s brother in the IDP camps.  While he was there, he enrolled in some classes at the camp’s church to learn the Dinka language.

In 2008, CSI’s slave retriever brought me, my wife from slavery, and our other three children back to South.  We were also reunited with my son who had escaped.  I saw that he had been taking Dinka classes, and that he was using the Bible to learn it.  I read some of his Bible, and I thought it was good.  I decided to become a Christian, and later a catechist, so that I could forget all the bad things in my head from my time in slavery.  I changed my name to Michael Yom Malit.

God has taken all the bad things away from my heart – all the bitterness and desire for revenge.  I only believe in God.

Three months later, in May 2014, the CSI team was thrilled to learn that one of Michael’s missing children, Deng, was among the 300 people who had just returned through our network!  When we met them, Michael told us:

I heard three days ago that some people had been brought back from the North, and were in Mayen.  They read the names of the people in church, and I heard my son’s name: Deng Yom Malit.  When I heard it, I was overjoyed!  Now I hope his siblings and his mother will come.  It’s in God’s hands.

Deng also told us his story of enslavement:

I was captured in Tiitchok when I was about eight. While I was looking after the goats, someone told me that the Arab raiders were in the area. I hid all day in the woods. But as the sun was setting, I decided to go home.  But I ran right into them.

An Arab called Sadiq caught me and put me in a group. I didn’t know any of the others. I felt alone.  Sadiq told me that he was going to take me to my mother and father, and put me on a donkey. I was too afraid to cry. They might have beaten me or killed me if I had started to make a lot of noise. On the way to the North, some people were shot in the head; others had their limbs hacked off.

When we arrived at Sadiq’s place, I complained because my mother and father were not there. Sadiq told me to forget about them. He threatened me, saying that he would kill me if I did not obey him. My first job with Sadiq was to look after donkeys. When I got older, I also had to look after the cows.

At home, I used to go to church, and I liked singing and learning things. But Sadiq made me pray like a Muslim. When I was with him, I would always say Islamic prayers. I never did the prayers when I was working far from him, though.

The worst part of life with Sadiq was the abuse from his children.  They called me bad names, like “jengai” [a racial epithet], “abd” [slave] and “kafir” [infidel]. They hit me all the time. Whenever I defended myself, they would tell Sadiq, and he would beat me.

One day, Sadiq told me to look after the cows, even though I was sick. He insisted that I go anyway. I decided then to run away. I went out with the cows, but did not return. After about five years with Sadiq, I couldn’t see any future for myself with him. I didn’t know where I was going, but I just wandered away. I might have died in the forest. I ended up finding another Arab cattle camp. Sadiq knew those people, and they knew him. But no one made me go back to him. I spent seven years working at different cattle camps.

One day, I met a Dinka who told me where to go if I wanted to find people who would take me back to the South. I took his advice and met up with the slave retriever’s group. I spent four days with them in the North. We were then put on trucks, and were brought back to the South.  The truck journey took three days. I’m so happy to have found my father. I don’t know what he has, but life will surely be better with him.

We are so thrilled to welcome Deng back to his homeland and his father!  Like all enslaved people freed through CSI’s network, Deng received the gift of a female goat, a ration of grain, and a “Sack of Hope” filled with farming tools, a tarp, a water jug, a cooking pot, a blanket and more.

To learn more about CSI’s work freeing slaves in North Sudan, and to donate to free more people like Deng’s missing brothers and sisters, go to www.csi-usa.org/slavery/