“Because we are Christians, we are slaughtered.” 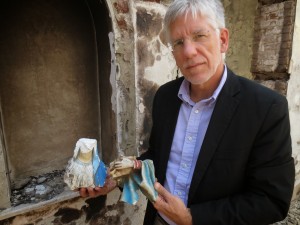 Dr. Eibner holds the shards of a statue of the Virgin Mary, destroyed by extremists who attacked a Christian school in Egypt.

CSI is working in Egypt to help Christian schools burned and destroyed during the August 14, 2013 pogroms continue to function. We also support local Christian activists fighting for their legal and political rights, and work to bring human rights violations against Christians to light. CSI has published two groundbreaking reports on the systematic forced disappearances of Christian women in Egypt, in 2009 and 2012, which were the subject of congressional hearings.

YOUR GIFT WILL PROVIDE EGYPTIAN CHRISTIANS WITH:

–        A chance to continue sending their children to school.

–        Financial support for Christians who have lost homes or family members to anti-Christian violence.

–        The tools to organize and defend their human rights.

Stories from the Field:

Meet the principal of a Christian school burned down by Islamic extremists. 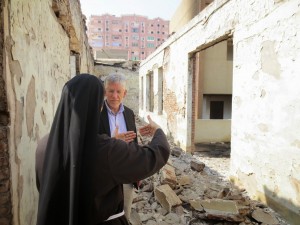 The principal of an Egyptian Catholic school shows CSI’s Dr. Eibner how it was destroyed by Muslim radicals.

Our school served both Muslim and Christian students, about half and half. On the morning of August 14, 2013, a sheikh began driving through the city, calling people out into the streets on a loudspeaker. A large mob formed in front of the school.  The students were not there because it was summer vacation, but I called the teachers and told them to stay home.  Then some men in the crowd broke into the school and entered and set the library on fire. They were screaming about kuffar, or unbelievers. I called the police, and they assured me, “We’re coming, don’t worry.” They were telling me that until the last minute. They never came.

Three of the female school employees tried to leave the building.  The Muslim one was allowed to pass by; the two Christian women were treated like animals – grabbed by the hair and dragged, and more.  Through the windows, we could see people looting the school and taking everything away in carts and trucks.  We heard a lot of gunfire. They broke the school’s cross and hosted the al Qaeda flag above it.

Finally, they set the whole school on fire, and the attackers took me and the other school employees out of the building and forced us to march through the streets.  The leader told us he had been ordered not to kill us.  First they said they would take us to a Christian bookshop.  I refused, because I was afraid it would be attacked too.  Then they said they would take us to a government office.  I refused this for the same reason.  Finally, they took us to the house of a woman I didn’t know, and ordered us inside.  I refused, because I didn’t know this woman, or what they were planning.  The man became very angry.  Then a Muslim woman, a former teacher at our school whose son-in-law is a police officer, saw us in the street, and came down and asked us to come into her house.  They allowed us, and we all went inside.

The nuns are currently working to rebuild their school, and holding classes for their students in the afternoons in a nearby school. CSI is providing funding to help the school continue its operations.