“Syria’s Christians are being deliberately targeted in a religious purification campaign.” 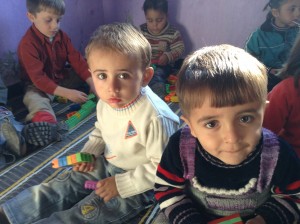 Since the start of Syria’s brutal civil war, over 200,000 people have been killed, and Islamic extremists, many from outside Syria, have begun kidnapping and massacring Christians, burning and bombing their churches and neighborhoods, and forcing them to leave their homes at gunpoint. The goal of these extremists is cleanse the country of non-Muslims and turn it into a Muslims-only state. Hundreds of thousands of Syria’s Christians have fled their homes, and the survival of the community is in question.

In the face of this catastrophe, CSI is funneling in aid to church workers serving Christian communities under siege in cities like Homs and Aleppo, and to Christian refugees in Syria’s more peaceful coastal region. CSI is also forcefully advocating against the U.S. government’s policy of support for Syria’s armed rebel groups.

YOUR GIFT WILL PROVIDE SYRIAN CHRISTIANS WITH:

Meet Fadul – forced to flee his home because of his faith 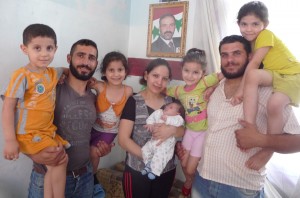 Fadul and his familiy were expelled from their home.

I am from Qusayr, Syria.  My uncle and two cousins were killed.

The mosques in the city started announcing from their loudspeakers that the Christians had to either join the anti-regime demonstrations or leave the town.  If we didn’t, we would be killed. They called out Christian families by name.

My cousin said, “We will not leave.  This is our town, our land.” He was recently married, and his wife was seven months pregnant.  They shot him as he was going to work on his motorbike and they shot him. I recognized his killers as locals.

We lived in a neighborhood known as “Christian street.” The rebels started shooting at people on the street. On March 22, 2012, a group of about 2,000 fighters surrounded the street and laid siege to it for three hours. My relatives and I tried to defend it as the other Christians hid in their homes.

My cousin was shot in the head.  My uncle went up to get his body, and he was shot dead.  We escaped down a back street and took shelter in an army checkpoint.  The attackers burned all the houses.  We heard them shouting, “All Christians must leave.”

The next day every Christian left – 870 families. Most left with nothing.  Only two or three very old Christians stayed.

I came back to Qusayr after the army retook it. I found my old street mostly destroyed. Our church was destroyed, and the icons were intentionally burned and desecrated.

I am from Aleppo. I had a fast food restaurant there. From the very beginning of the Syrian crisis, we heard people in the street chanting, “Alawites to the grave, Christians to Beirut.” Our neighborhood was targeted by the rebels, because most of us are Armenian Christians. They occupied a nearby Sunni Muslim neighborhood and started firing mortars into our neighborhood. Some Christians we knew in the Sunni neighborhood were executed. The rebels went into their homes and slit their throats. We had to leave.

First, we took a bus to stay with my wife’s family in the eastern city of Hassake. Four months after we moved there, I was walking in the street and saw a man on a motorbike try to throw hand grenades into a kindergarten with about 40 children inside. The hand grenade went off before he could throw it, and he lost most of his arm. The police caught him. After that, we decided to come here to Tartus.

My restaurant and our old church in Aleppo have been completely destroyed. I don’t know what happened to our house. All we want is to go back home.

CSI’s partners in Syria have helped this family find a house to stay in, and provided them with food, mattresses, and funds for expenses.