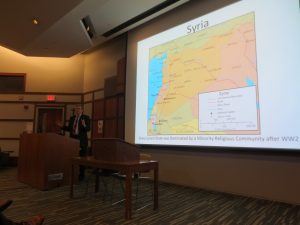 In April of this year, Syria expert Joshua Landis spoke at Boston College on “ISIS, Christians and National Identity.” His talk was part of Christian Solidarity International’s lecture series on “The Future of Religious Minorities in the Middle East.” A video of his talk can be viewed online.

Following his talk, Landis was interviewed by Al Noor, the Boston College Undergraduate Middle Eastern Studies Journal. The text of the interview follows.

A Great Sorting Out: The Future of Minorities in the Middle East

Al Noor: During your talk, you said religion is driving the “Great Sorting Out” in the Middle East, as opposed to ethnicity, which drove it in Europe. How did this happen?

Joshua Landis: After the Second World War, Arab nationalism was the prevailing ideology. You look at Arafat, at Sadaam Hussein, at Nasser – who was of course the apotheosis of this. You look right across the entire Arab world all secular nationalist regimes. Now they became dictatorships, they oppressed their people, they were brutal, they were of course confused about local nationalism versus pan-Arabism. And ultimately, they couldn’t deliver to their people. And Islamism has grown up, progressively, as the alternative. Liberalism and its other alternatives were smashed, because they were much more vulnerable. The Islamists were more hardy, they had the space of the mosque, they had a hierarchy, zakat, they could get independent funding. There were a lot of reasons why the clerics and this establishment could provide an alternative ideology, and why that ideology won.

Al Noor: So you think that Arabism might not have been the right secular nationalism for the region? That if local nationalism had won out, things might have ended differently?

Joshua Landis: Yes, I do think so. The trouble was, it was very hard to get people to embrace these national identities, because they hadn’t known them before. They were totally new – Syria, Iraq, and the rest. People had lived in an Islamic, dynastic empire. They had local allegiances to their city, their region, but they didn’t have national identity. So to get them to switch to that was a real challenge, and some leaders tried to do it, but they failed. Pan-Arabism had a very big appeal.

Al Noor: Earlier, you mentioned that Syrians love their country, and that 76 percent of Syrians would like to maintain a unified nation. Where do you think this love of Syria comes from, and do you think it has any viability moving forward?

Joshua Landis: I think a lot of Syrians look back at their pre-revolutionary lives, and they want to have that back. They want the old Syria back; the Sunni Arabs just don’t want to have Assad rule it. They want to rule it themselves. They want their life back, but without Assad’s soldiers, and the Baath Party and all of that. It’s very idealistic. But they miscalculated; they thought they could overthrow Assad. So Syrians don’t want to be divided up – the whole idea of Arab nationalism is that Sykes-Picot was bad, and dividing-up is a foreign conspiracy. Islamism is much the same thing – they want a caliphate and a unified Muslim world, and they don’t want to be divided up. Both Arabism and Islamism share this common notion that external conspiracies divided them, and are evil, and that they need to be united together.

Al Noor: But if the rationale for unity is Arabist or Islamist, is there any room left for minorities? Is there any way for Syria to forge a pluralist future?

Joshua Landis: It’s ultimately very hard to see how they’re going to put it back together again. I can’t see a way out. The Sunni rebels say you’ve got to get rid of this nizam, this regime, Assad, the whole Baath party, the whole Alawite hierarchy, all the soldiers and the officers. And of course it will be over the Alawites’ dead bodies, because they won’t give up. They know they’ll be killed if they give up power. And the regime has mobilized communities behind them. Alawites are sympathetic with the Assads today, because they think they’ll all be driven into the sea if they give up. And they very well might be.

Al Noor: What do you think is the best-case scenario for the Christian minority in Syria? Is it Assad staying in power for the long term?

Joshua Landis: I don’t think that Assad really can stay in power for the long term. I think if you were a Christian, or an Alawite, I think you would hope for Russia to impose a partition of Syria. And in a sense Russia would stay in that coastal region and in the urban areas where the Christians live, and America would take over the other parts, where ISIS is and where the rebels are. That would leave Assad and minoritarian rule in the coastal region. Many Alawites today would like an ethnic enclave, and they would like to include the Christians with them. They would keep Homs, Wadi al-Nasara, Damascus, the Armenian regions up near Kessab and so forth. Many don’t want the rest of Syria, because they don’t know how they can rule it – Der Zor and all those tribal regions. But they don’t really have an answer. This is the trouble. I think they would like to have an ethnic enclave, but they would like to have somebody to protect them in it.

Al Noor: You mentioned earlier that there is simply no political appetite for an expensive intervention in Syria. But if you forget domestic constraints altogether, could an outside adjudicator play a constructive role?

Joshua Landis: It depends on how much money you want to spend, and how many people you’re willing to send in.

Al Noor: Imagine a commitment of the size we had in Iraq.

Joshua Landis: If the United States were to occupy Syria, there would be jihadists blowing themselves up at roadblocks, the way they did in response to the Israelis in Lebanon, in the way they did in Iraq. It would be difficult launch a unilateral occupation today, because the mobilization against it would be tremendous. On the other hand, in Syria today, people might be willing to accept an international peacekeeping force, with the Americans and Russians cooperating, for example. I think many Syrians would embrace it. They want to end the fighting, they’re desperate and they can’t see an end. So I think they would accept such a solution. Of course there would be those Islamists who would come out to fight, and so forth, but I think that you could do it like in Yugoslavia.

Al Noor: Speaking of outside adjudicators, the United States originally hoped that Turkey might be able to fill this role. What is your comment on the role of Turkey in Syria, and especially whether or not it has been a reliable partner to the United States?

Joshua Landis: I understand how Erdogan got dragged into this, each step of the way. He made a lot of miscalculations, but so did Obama and everybody else. They all thought that Assad was going to fall. And of course Erdogan once had very good relations with the Assads, and America forced him to withdraw. Once he made the calculation that Assad was going to fall, he started to organize the opposition. He thought he could get a Muslim Brotherhood that would be just like his AK party to take over Syria and rule. And therefore he would have a mini-Turkey to himself, with an Islamist party ruling in a civilized way. And that’s what he put his mind to, and it just wasn’t going to work out. He didn’t understand the Arab world any more than America understood Iraq. Once he got his horns down, he started supporting Nusra and al-Qaeda, and ISIS – and he made all the same mistakes that America has made. Thinking they could use the Islamists to their own ends, beefing them up only to find they’re blowing up parks in Istanbul. So Turkey has made some terrible mistakes. But to some extent they’re stuck with Syria because they’ve got a 500-mile border and the Kurdish question. Erdogan had done all the right things for the Kurds and built the economy, and now it’s in a shambles. Now a war has started again with Kurds and how he’s going to stop that is very difficult to know.