In Syria, CSI works with several partners to provide relief to Christians and others living through the terror of war. One of these partners whose work we support is “Sister Sara” (not her real name), a Catholic nun who works among the displaced on the Syrian coast – where hundreds of thousands have fled to to escape the violence. These are some of her stories. 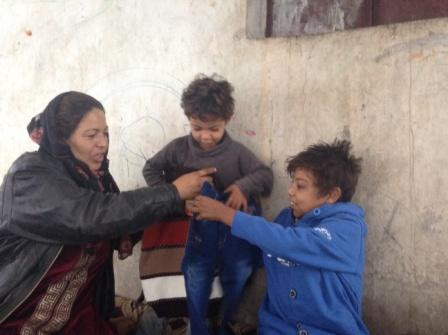 Among the poorest refugees Sister Sara cares for is Monzer, a single mother to four children. Two years ago, Monzer fled with her children from Hama province to the coast. Before, she had stable employment as a maid. Now she works at a tomato plantation for $0.50 an hour, and lives with her children in a corrugated iron hut. “My children have to help me with the hard work and cannot go to school,“ she says regretfully. But her main concern is for her son Nizar, 12 years old, who was diagnosed with leukemia four years ago. “Although he receives free treatment in the state hospital, we have to pay for the expensive drugs ourselves. And we simply do not have the money.“

In this desperate situation, Monzer heard of Sister Sara and asked for help. Sister Sara responded immediately. For over a year now, Sister Sara has paid the costs for Nizar’s vital medicines and supplies him and his siblings with clothes and shoes. This support also allows Nizar and his siblings to participate in Sister Sara‘s children’s programs. “These are the only moments where they can be children,” says Monzer. “Sister Sara has brought hope into our heavy everyday life. May God protect her.”

Ali, Kassar and Riyadh (8, 9 and 10 years old) are originally from Aleppo. Their neighborhood was hit by heavy fighting, and a year ago, they fled with their parents and grandparents to the Syrian coast. Here the father found a way to make a scanty living as an agricultural laborer. The family lives in a corrugated iron hut in the middle of the fields. The three children have never gone to school because the school in Aleppo was too dangerous. After 6 months, the children are making enough progress to enter into the regular village school in the new school year. As the winter nights are very cold in the drafty hut, Sister Sara supplied the family with blankets and a heater. 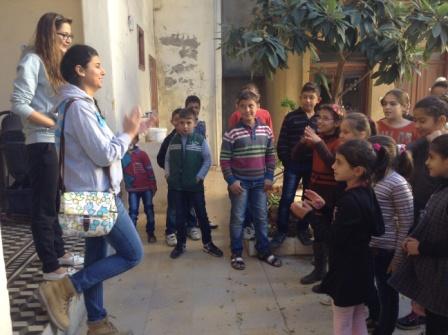 In addition to the 400 Syrian Christian refugee families Sister Sara looks after, she also cares for a group of Sunni refugees from northern Syria, including 150 children, who live in a refugee camp near Tartus. For two years, she has provided them with clothes, shoes and medicines. Starting this fall, she began organizing weekly activities for these children, to make sure they have a time every week to forget the troubles of war. These activities are organized by young volunteers called the “Peacemaker Team.” 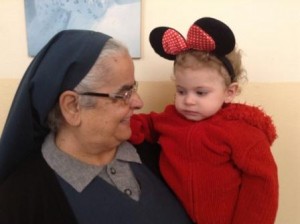 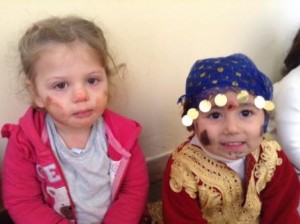 In Syria, the Christian holidays start early with the Feast of St. Barbara on December 4. These pictures show the special celebration Sister Sara organized for the refugee children she works with on this year’s feast.

“Syria in these days of Christmas”

In spite of all the destruction and very hard life all over Syria, I have noticed that for the first time since the outbreak of the war, people decided to quit their fear and go on living. In spite of the big danger, the Christians decided to celebrate Christmas more publicly than in the last few years. In Damascus, for example, they filled their neighborhoods in Jaramana, Kassaa and Bab Touma with Christmas ornaments even in the streets. Sister Fadia of our convent celebrated in Homs last week a Christmas chanting concert with young boys and girls from Tartus – also for the first time in 4 years.

The general situation is still very hard with severe shortage of fuel, and many of Christian families are still in deep need economically, but almost everybody decided to quit fear and go on living, hoping for the best in the future.

As nuns and priests, we want our Christian community to feel not abandoned, so we always want to express faith and joy in spite of war and terror. We never want to quit celebrating our Christian feasts like St. Barbara and especially Christmas. These have always been very special in our Country. Therefore, we are preparing for a big Christmas party next Monday, December 22, gathering the children and their families in our convent to celebrate. The Sisters of the Sacred Heart still insist of going on with our mission, which is proving that life is much stronger than death!