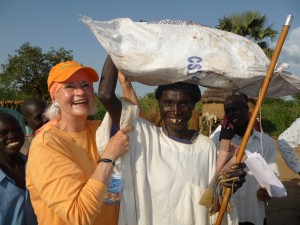 A Denver pastor is using her personal stories about freeing South Sudanese slaves to inspire Marin Catholic High School students to support her cause and advocate an end to slavery.

The Rev. Heidi McGinness has been working with Christian Solidarity International — a nonprofit human rights organization — for about 10 years, documenting the stories of more than 2,500 South Sudanese slaves and freeing them from Darfur and Kordofan. Her goal is not only to help these people, but to draw national and international attention to an issue she believes has been largely neglected.

“Slavery in Sudan is not an intellectual construct. It’s a horrific reality,” McGinness said. “Sudan is the only country in the world that has government-sponsored slavery as a tool of genocide and ethnic cleansing.”

During a school assembly Friday at Marin Catholic, McGinness relayed the stories and personal experiences of the freed slaves she has met to an auditorium of teenagers. She was invited to speak by the school’s St. Vincent de Paul club, whose members were inspired to support the effort to end slavery after hearing a talk by former Sudanese slave Francis Bok.

Joe Tassone, global studies teacher and club moderator, said the students are planning a walk-a-thon on April 20 to raise money for McGinness’ work. He said they’re learning the logistics of operating a fundraising campaign, from advertising to parent outreach.

“The kids are really putting this on. They’re going to be manning the booths at the walk-a-thon,” Tassone said.

The exact details of the fundraiser have yet to be worked out, but club member Christina Torre, a junior, said it costs about $100 for Christian Solidarity International to free a slave and help the person start a new life.

“It’s really not that much to save a life,” Torre said.

Slaves are freed through a process that involves the Arab-Dinka Peace Committee, community leaders and religious officials. McGinness said released slaves are traded for bovine vaccines, which run about $50 per cow. The remaining $50 from a $100 donation is used to provide the freed slave with supplies such as grain, a mosquito net and sometimes a goat.

More than 35,000 Sudanese are still enslaved, according to McGinness. She said the release of slaves taken during the 23-year civil war between the North and South of Sudan was not part of the Comprehensive Peace in Sudan Act of 2004 and South Sudan’s independence in 2011.

“Each (freed slave) always says we know where there are more like us. Please go get them,” McGinness said.

Stories of slaves being dragged by horses, burned, mutilated, blinded, cut and forced to watch their friends and families executed are plentiful.

McGinness said a 9-year-old boy named Peter had a spear thrust through his foot by his slave master because he lost a goat. He had such bad gangrene on his foot when he was freed that the dead tissue had to be sliced off.

Another freed slave named Mary was taken from her church by radical Islamists and told to renounce Jesus and accept Allah. McGinness said Mary was forced to watch as her pastor was doused in gasoline and lit on fire because he refused.

Despite their traumatizing experiences, McGinness said the South Sudanese people are forgiving. She said Christian Solidarity International is assisting them in forgiving and reconciling with their northern counterparts.

“We want reconciliation. We want the people to be able to work together, because that’s the future of the area,” McGinness said.

“All of us must concentrate on peace so the children of the world can experience it in their lifetime, no matter who we are and what faith we have,” McGinness said.

Read this story at the Marin Independent Journal