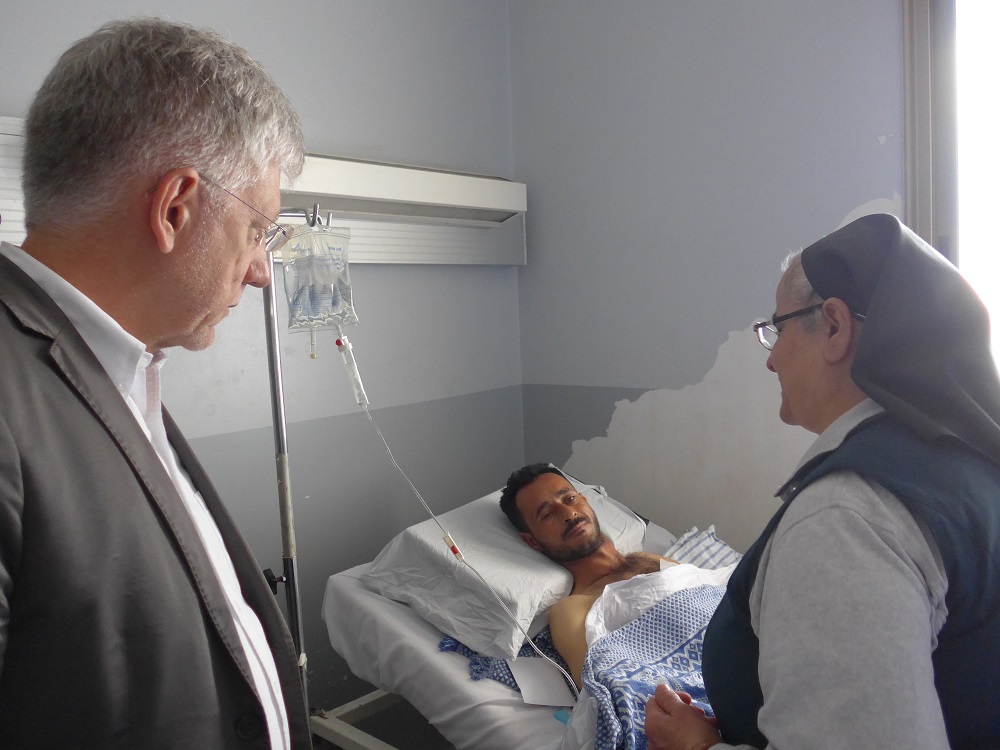 Dr. Eibner visits a hospitalized survivor of the May 2016 Islamic State bombings in Tartus, Syria.

CSI’s John Eibner recently returned from a ten day visit to rarely
visited locations in war-torn Syria. Upon his return, Dr. Eibner was
interviewed by Philipp Hufschmid of the Swiss daily, The Berner
Zeitung. Below is an English version of the interview.

BZ: At the beginning of your 10-day stay in Syria, you were in the
Kurdish-controlled northeast, visiting Christian villages that had
been conquered and occupied by the Islamic State. Why were you
there?

BZ: Were you able to speak with villagers?

JE: Yes, but not many Assyrian Christians are left. Only a few
returned after the departure of the Islamic State. Some of the
farmers, who now live as displaced persons in other towns return
during the day to tend their fields. I fear that this could be the
end of the Assyrian Christian presence there. These Christians are
the descendants of survivors of genocide in Turkey 100 years ago.
They sought and found refuge in Syria. Now this Christian community
is again subjected to renewed religious cleansing.

BZ: Who looked after your security?

JE: I was accompanied by members of the Christian Sutoro Militia,
which is allied with the Kurdish YPG. This militia should not be
confused with the Christian Sootoro Militia that fights in
coordination with the Syrian Army. We were caught up in a gun battle
between the Kurdish YPG and the Syrian Army in the provincial capital
Hasaka. We sought shelter in a church and waited for four hours until
the shooting and shelling ceased.

BZ: You also visited western Syria. You arrived in the Mediterranean
harbor city of Tartus only a few hours after the coordinated bomb
blasts of the 23rd of May that killed 150 people in the region.
What did you observe in Tartus?

JE: I was able to speak with survivors in the hospital. They told me
that the city’s busy bus terminal was the focal point of the attack.
First a car bomb exploded. Then suicide bombers pretended to help
others get away from the area, and blew them up. The same thing
happened at the same time a little farther north in the town of
Jableh. The Islamic State claimed responsibility. Their goal was to
destabilize the region by provoking acts of revenge from the side of
the indigenous Alawite population against the many Sunni displaced
people who have sought refuge there. The two communities have lived
in peace in this government-controlled part of Syria since the

beginning of the war.

BZ: Was the hospital able to cope with this emergency situation?

JE: The doctor, who was my guide, assured me that they had enough
medical personnel, medicines and operating theaters to meet the
challenge. But there are other problem areas regarding medical needs.

JE: I visited a young woman in Damascus whose life depends on daily
doses of special medicine from western pharmaceutical firms
following a kidney transplant operation. The war has led to a drastic
devaluation of the Syria currency. Now her parents no longer have the
earning power to buy the life-saving medicine. Their total monthly
income has the value of less than $65, whereas the medicine costs $80
a month. This can be fatal for their daughter. They already had to
buy a kidney from a donor who was desperate for money. Kidneys can be
bought relatively cheaply in this catastrophic situation. This is one
of the consequences of western economic sanctions against the Syrian
state.

BZ: The Syrian regime, which has militarily destroyed that country
and provoked sanctions, is responsible for this crisis.

JE: Those who impose economic sanctions also bear responsibility for
the consequences. It is the civilian population that suffers most.
Studies about the effect of sanctions against the regime of Saddam
Hussein in Iraq confirm this fact. The American and European public
should be aware that the sanctions imposed by their governments kill
innocent people, especially the most vulnerable. The economic
sanctions also are a powerful driving force behind the destabilizing
waves of migrants to Europe and neighboring countries.

BZ: In recent months, the Islamic State has pulled back from some
areas. How weakened is this army of terror?

JE: I cannot be the judge. Some retreats might be merely tactical.
But I think it is more helpful to speak about radical Sunni Islamism
instead of only its most flamboyant institutional manifestation.
The problem of intolerant Sunni Islamism will remain, even if the

Islamic State is removed from the scene. Speaking of the Islamic
State in retreat, I was, for example, in the town of Sadad, southeast
of the city of Homs. It was there for the first time that a coalition
of the Syrian Army, Hezbollah and the Syria Social National Party
(SSNP) stopped an Islamic State offensive in Syria without support
from air strikes.

BZ: The SSNP came to existence in the 1930s under the intellectual
influence of European fascism. What role does it play today?

JE:
The SSNP is a secular-nationalistic party, which was allowed to
operate again in 2005 after having been banned for decades by the
country’s Baath Party-dominated government. It understands itself as
a loyal opposition to the government in Damascus. It cooperates with
the Syrian Army in order to prevent forces of radical Islam from
seizing power. Because the government needs fighters, it has to rely
on the SSNP to help make up the deficit. In some places, such as the
old city center of Homs, the SSNP is responsible for policing and
administration. The armed forces of this party also help provide
security in al-Qaryatayn, which was recently recovered from the
Islamic State. If the current peace process ever gets Syria off the
military track, the SSNP could play an important role in a political
transition. It has considerable popular support among secular-minded
Syrians.