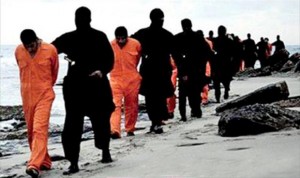 Professor Mariz Tadros of Sussex University has written a powerful essay in the wake of the Islamic State’s execution of 21 Coptic Christians in Libya:

“Of the 1,125 cases of kidnapping [of Egyptians in Libya], only the Christians have been killed. …[There is] an ideologically driven political project which is intended to clear the Middle East of its religious minorities, and liquidate religious pluralism.There are strong resonances in the modalities of religious cleansing deployed by varied Islamist militant groups and ISIS in Iraq, Libya and Syria. …it is precisely the role of the US in aligning, supporting and nurturing militant groups in Libya, Iraq and Syria as a catalyst for the current existential threat to religious diversity in the region that we need to bring to the forefront.”

Professor Tadros presented two CSI-supported lectures about the threat of Middle East Christians during the reign of the Muslim Brotherhood in Egypt: “The Challenges of Building An Inclusive Democracy in Egypt and Syria” (June 8, 2013) and “Islamist Majoritarian Democracy in Egypt” (November 28, 2012).