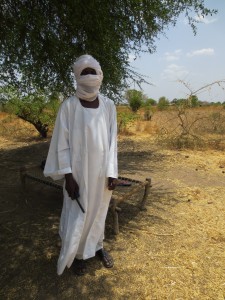 CSI’s Underground Railroad in North Sudan utilizes Arab Muslim traders, known as “slave retrievers,” to bring enslaved people back to their homes in South Sudan. Hunted by the North Sudanese government because of their anti-slavery activities, they must conceal their identities and keep their work secret – even from their own families.

Here, one such slave retriever tells his story.

CSI: When did you begin this work?

SR: When I started, I was just a trader.  I would sneak goats from North to South Sudan to sell during the war.  The people here saw how we were able to bring the goats here.  In 1991, a committee of Arab chiefs in Meiram and a committee of Dinka chiefs in Warawar signed an internal peace agreement, and the Dinka chiefs told us they had people trapped in the North, and asked if we could bring them back in exchange for a goat or a cow.  A group of traders sat down and considered the proposal, and asked, is this something we can do?  My brother Mohammad, the firstborn, went and collected 15 people and brought them back.  The people here were so happy, and reported it to the local SPLA commander, Paul Malong, who then told CSI about it.

From that time, my brother and I worked together to free the slaves – I would bring the people to the south, and he would bring the goods exchanged back to the north.  This continued until CSI came to help, and the work expanded.

CSI: How do you free the slaves?

SR: We have a committee in the north that tries to locate slaves.  We make an agreement with the sheikhs in a certain area, to provide them with cattle vaccine for their cows in exchange for the release of the slaves in their cattle camps, and then we go around collecting the people in twos and threes, and bringing them to one place.  Then we travel to the South together.

CSI: Do slaves sometimes escape from their masters and join your group?

SR: Occasionally, yes.  Often the masters release slaves who are no longer valuable for work first.  If able-bodied slaves escape, the masters will come searching for them, and try to take them back from the committee by force.  So if people reach me by escaping, I try to take them to the South right away.

CSI: How do you deal with masters who refuse to release their slaves?

SR: We have to struggle, struggle, and try all means to get them released.  Our committee goes to the sheikhs in the area who made the agreement with us, and brings them to the master to try to work out a solution.  Sometimes we have to give them double the usual amount of vaccine to get the slaves released.  Sometimes the sheikhs have to go and collect the slaves for us by force.

CSI: Do you ever involve the police?

SR: No.  The government and the police are not involved.  Even if the police were willing to help, if we tried to use their help, we would not be able to free one single person.  The cattle camps are protected by armed men, who will resist outside interference.  They will fight.  They will not accept people coming to take the slaves by force.

CSI: How do you travel with the freed slaves to the South?

SR: After the people are gathered, we travel to several way-stations on the way to the South, staying for a time in each place.  When we arrive at the border, we wait for night to come and cross the border under the cover of darkness.

CSI: Do people ever die on the journey back to the South?

SR: Yes, a lot of people have died from sickness. If a person cannot walk, we provide donkey carts for them to ride in.  If someone appears too sick to travel, we leave them behind at our bases in the north so they can recuperate before traveling.

CSI: What are some of the dangers you face in your work?

SR: The danger comes from two sources: the North Sudanese government, and armed criminals.  Two months ago, we encountered a group of armed bandits north of the border, and we were in real danger.  But we fear only the government.  If we encounter bandits, we can sit down with them and work out a deal.  If the government finds me, I will be arrested.

When we come close to the border, we cannot walk across directly.  We have to take different paths that aren’t straight to avoid detection, and the journey takes longer.  When I return to the North from South Sudan, I have to be escorted by southerners; otherwise, the Sudanese People’s Liberation Army will give me trouble as a northerner.

CSI: Why does the government try to stop you?

SR: The government denies that slavery exists in Sudan.  They cannot accept my work – bringing slaves back to their home.

CSI: Is the government looking for you now?

SR: Yes, they are.  Some of my relatives have positions in the government, and they have told me that if I am found, I will be arrested.

In 2011, while I was in South Sudan completing a mission, someone gave my name to the Northern security forces.  They came to my hometown, arrested my mother, and took her to Khartoum.  They kept her in prison for five months, torturing her and demanding to know about my work.  She became sick with high blood pressure.  When they finally released her, she was paralyzed on one side of her body.  She died a year and a half later.  That’s the most terrible thing that ever happened to me.  I was responsible for my mother, and she died because of my work.

CSI: Does your family know about your work?

SR: No, my work is very secret.  I cannot tell my friends, my wife or my children.  They only know that I am a trader.

CSI: What do you think of slavery?

SR: What I know is this: slavery will never stop unless the whole system of government in North Sudan is changed.

CSI: Will you and the other slave retrievers be able to bring all the slaves who were captured during the civil war (1983-2005) back home to South Sudan?

SR: Yes, we can.  If they are in the cattle camps, we can get them back.

CSI: How many people do you think are still in slavery in Sudan?

SR: So, so many.  Four slaves are used to herd 100 cows.  A single family in North Sudan can have as many as 10,000 cows.  And then there are the people who work on farms, or on local projects.  There are so many places we have never entered.

CSI: Will you enter them eventually?

SR: Yes, we will go.  We know how to get them out.  This is humanitarian work.  It is good work to bring people from slavery to freedom.  It is good for human beings to be free.  We are very happy because of the warm welcome the South Sudanese government has given us in our work.  But I’m very upset with the North Sudanese government.  I have suffered so much from them because of my work.  I will not give it up.  I’ve already lost too much to do that.

CSI: What would you like to tell people in America and Europe?

SR: Please stand with us to bring these people out of slavery.  We want to bring each and every one back to freedom.