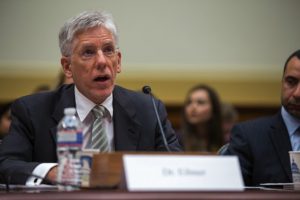 The deaths of scores of Syrian civilians in al-Qaeda controlled Idlib Province, apparently caused by banned chemical weapons during a Syrian Air Force bombing raid, has triggered US cruise missile strikes against a Syrian government military target. President Trump’s rapid response to what he rightly called a “heinous” act marks a major escalation of American military intervention in the Middle East.

Four months ago, then President-elect Trump pledged that under his leadership the United States will “stop looking to topple regimes and overthrow governments”. Prior to his inauguration, Mr. Trump expressed dismay at the grisly and costly consequences of American regime change efforts in Iraq, Libya, Egypt and Syria. But the missile strikes, combined with his strong anti-Assad rhetoric, indicate that President Trump is now ramping up his predecessor’s Syrian regime policy.

It is now more important than ever that President Trump does not continue the Obama administration’s policy of arming anti-democratic Sunni supremacist jihadists as American proxies. While such a policy might achieve the overthrow of the Syrian President Bashar al-Assad, we have already witnessed that armed jihadists are arguably as much of a menace to mankind as chemical weapons.

Since Washington first started arming the mujahedeen in Afghanistan in the 1980s as a cheap and politically risk-free way of bleeding the Russians, violent jihadist movements have been empowered have mushroomed throughout the world. The rise from nowhere of Osama bin Laden’s al-Qaeda and the 9/11 attacks against the United States and the anti-American Sunni insurgencies in Iraq and Afghanistan were unforeseen consequences of that misguided policy.

President Obama’s decision in 2011 to employ a similar policy in Syria has produced similarly devastating results. The Syrian people are the first among the victims. The 80-plus victims of poison gas in Idlib represent just a small fraction of the nearly half a million who have perished, the 12 million who have been displaced and the many more who have been reduced to destitution since then.

Energized by support from Washington and its coalition of western and anti-democratic Islamist allies – in particular Saudi Arabia, Qatar and Turkey – the jihadi movement produces death and destruction in the United States, Europe, Africa and Asia with increasing frequency. There is now a very real danger that whatever chemical weapons the Syrian government retains will fall into the hands of jihadists. Once sufficiently strong, jihadists have the habit of turning against erstwhile patrons. The Islamic State’s targeting of western interests since its conquest of Mosul in 2015 is a classic example.

Whatever President Trump feels he needs to do to protect the United States’ vital interests, the arming of jihadists must no longer be a part of the mix. In the current crisis, Congress must help our new President resist the temptation to support jihad terrorists and those that collaborate with them to achieve regime change in Syria or other strategic goals. Passage of the Stop Arming Terrorists Act is now more pressing than ever.