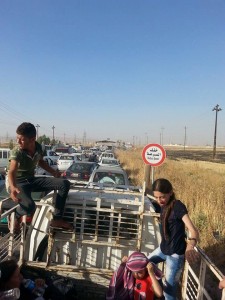 ERBIL, Iraq, June 26, 2014 /PRNewswire-USNewswire/ — Over 50,000 Iraqis, mainly Christians, from the Nineveh township of Qaraqosh, 12 miles east of Iraq’s second-largest city Mosul, were displaced last night as a result of shelling by the armed forces of the Sunni extremist Islamic State in Iraq and Syria (ISIS). The township includes the historic Christian villages of Keremles and Bartella. With the collapse of the Iraqi army in Mosul earlier this month, the only armed defenders of Qaraqosh are members of the Kurdish Pershmerga militia.

A CSI team is in the area to assist with relief efforts.  According to CSI’s local partner, the Hammurabi Human Rights Organization, the ISIS attack against Qaraqosh “portends a humanitarian catastrophe for all the people in the Nineveh Plain, and a disastrous emigration of Christians out of the country.”

“Those who had cars drove. Those who didn’t went on foot,” a local Iraqi Christian told CSI.

The displaced have taken refuge in churches and monasteries across the Kurdish-controlled region, threatening to overwhelm NGOs and local administrators who were already dealing with a humanitarian crisis after the fall of Mosul on June 11.

After taking control of Mosul, ISIS militants cut off electricity and running water to Qaraqosh and the surrounding areas, putting pressure on local residents to leave their homes. Following this assault, nearly the entire population of Qaraqosh has fled. Local sources indicate that less than a hundred elderly and infirm have remained behind out of an initial population of 45,000.

Non-Christians in the multi-cultural Nineveh Province are also under threat from ISIS. They include Yezidis, Shiites, and liberal Muslims, all of whom ISIS regards as infidels without human rights.

ISIS is an al Qaida-inspired terrorist group that has controlled large swathes of eastern Syria for over a year, and has made major territorial advances in Iraq in the last month. In areas under its control in Syria, ISIS has desecrated churches, executed religious minorities, abducted and killed priests, and ordered Christians to choose between converting to Islam, paying the traditional jizya tax, or “facing the sword.” Thousands of Iraqi Christians fled Mosul for Qaraqosh after ISIS took over the city on June 11, and ISIS later claimed to have executed 1,700 Shi’a Muslims in the city.

Since the commencement of the US-led Operation Iraqi Freedom in 2003, more than two-thirds of Iraq’s Christian population has fled the country to escape a campaign of targeted abductions, assassinations and church attacks. Many who remained in Iraq found refuge in Qaraqosh and other nearby predominantly Christian villages. “With the targeting of one of Iraqi Christians’ last safe places,” Dr. John Eibner, CEO of CSI-USA, warned, “the Iraqi Christian community is closer than ever to extinction.”