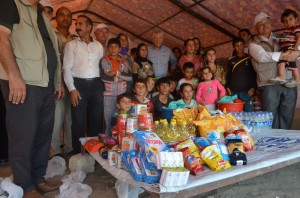 One month ago we witnessed heart-wrenching media images from Iraq of the displacement of 200,000 Iraqi Christians and 50,000 of their Yazidis neighbours by jihadi warriors of the Wahhabi-inspired Islamic State (IS). This human tragedy has dropped out of the headlines. But, as the UN High Commissioner for Human Rights, Navi Pillay, stated recently:

IS fighters are “systematically targeting men, women and children based on their ethnic, religious or sectarian affiliation and are ruthlessly carrying out widespread ethnic and religious cleansing …  Such persecution would amount to crimes against humanity.”

I travelled extensively in northern Iraq last month, and encountered a profound sense of despair in all sectors of Christian and Yazidi society. “Please, take us out of Iraq” was the near universal plea of the displaced.

Bushra Boutros, a young married mother of three, is desperate to flee the country. Until 18 July, she and her family lived in Sunni Arab dominated Mosul.  They, like many other Christians, chose not to leave when the IS easily conquered the city eight days beforehand. But, she recounted:

“The threats started in the evening. They were conveyed by anonymous phone calls, and the loudspeakers of mosques. The message was just for Christians: convert, pay the jizya (the traditional Islamic protection tax on Christians and Jews), leave the city, or die. We were so frightened we could not sleep that night. At 5:00 am we piled into our car with some belongings, and drove out of the city. We were fortunate, and escaped losing our possessions – some cash, jewellery and cell phones. All those who tried to leave only a few hours later were robbed at the IS checkpoints and lost everything apart from the clothes on their backs”

Bushra learned a hard and humiliating lesson: “We are unwanted guests in our own country”. This is hard to swallow for both Christians and Yazidis whose presence predates the arrival of Muslims by many centuries.

Bushra’s family found refuge in a school in a remote Christian village in the hills of Kurdistan. There they sleep on the floor of a small classroom with 12 other destitute people, surviving on goods donated by the local parishioners and modest food parcels of the sort delivered by Christian Solidarity International (CSI) and the Hammurabi Human Rights Organization. Bushra’s most immediate need is to secure blankets and warm clothing for her family. Cold autumnal nights arrive early in the highlands of Kurdistan, and the school room is unheated.

Yazidis have a rougher ride than the Christians. They are at the very bottom of Iraq’s religious totem pole. Their syncretic faith, with links to Zoroastrianism, does not qualify them for any rights or privileges under Islamic law and tradition. Unlike Christians and Jews, they are regarded as entirely outside Islamic law, and are not therefore entitled to any protection from the Islamic state. They can be killed, raped and enslaved with impunity. This has been the fate of thousands of Yazidis who have fallen into the hands of IS.

Zen Baree – not his real name –  is a demoralized Yazidi chief. He survived seven terrifying days without food on Sinjar Mountain, together with thousands of his people. Salvation came, Zen recounted, not from US airstrikes and the Pershmerga forces of Iraqi Kurdistan, as claimed by President Obama, but from Kurdish guerrilla fighters of the secular Turkish/Syrian-based PKK. The PKK has been classified by the United States and the EU as a terrorist organisation. Chief Zen’s praise of the PKK’s humanitarian intervention is as boundless as his contempt for the inaction of the United States and the authorities in Iraqi Kurdistan.

Chief Zen escorted me to several settlements of his displaced people. Most displaced Yazidis would gladly trade places with Bushra’s family. Forty-eight destitute Yazidis shelter under a makeshift tent. In a nearby school, over 50 people live in one room. A group of 35 have nothing over their heads apart from the branches of a few trees. The displaced Yazidis are isolated, and don’t have the local and international networks of support on which Iraqi Christians can rely.

The clear message coming from the displaced is that they will only have a future in Iraq if their long-term security is guaranteed by an international armed force from outside the Middle East. But I met no one who believes there will be such an intervention. President Obama has made clear that Washington will not make such a commitment. The displaced have also seen that American airstrikes have so far been directed at regaining control of the Mosul Dam and nearby oil installations, not of their emptied towns and villages.

As one Catholic priest told me, the crimes against humanity committed in August mark a watershed for Iraq’s Christian community. “It has destroyed the last ray of confidence in any power to provide protection against the aggression of hostile Islamic forces,” he said. By those powers, he means the Iraqi central Government in Baghdad, the regional authority of Iraqi Kurdistan in Erbil, and the United States and its allies. The West, the priest believes, is beholden to Saudi Arabia, Qatar and other Wahabi-oriented powers that regard Christians and other non-Sunnis as infidels, and is therefore incapable of acting in the defence of “infidel” victims of the IS.

The confidence of the faithful in the politics of church leadership has also taken a severe beating. The bishops have long encouraged their flocks not to emigrate. The prelates have done so in the belief that participating in Christian-Muslim dialogue, proving service to the Iraqi nation and expressing support for the Palestinian cause would secure protection from the country’s Islamic powers. But this policy ultimately failed to deliver security.

The existential crisis facing Iraq’s rapidly dwindling Christian community is as acute as ever. Profound change in the political culture of both the West and the Orient is a must if Iraq’s religious minorities are to become something other than unwanted guests in their own country.

Dr John Eibner is the CEO of Christian Solidarity International-USA

Read this article at The Tablet.