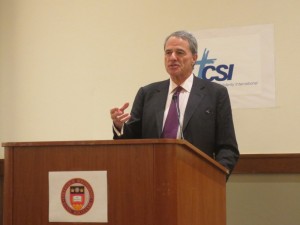 BOSTON – “Until the regional powers and superpowers agree that the war in Syria should end, it will not end,” veteran Middle East correspondent Charles Glass said Wednesday.

In a public lecture at Boston College, Glass, who has been reporting on Syria for decades and still regularly travels to the war-torn country, described the Syrian conflict both as a proxy war between the U.S. and Russia and regional powers, and a civil war rooted in local issues. “But the decisions, the money and the weapons come from the superpowers and the regional powers,” he concluded, “from the Americans through their client states and from the Russians and the Iranians.”

According to Glass, “The U.S., Britain and France had long harbored a wish to get rid of the Syrian regime.” When the Syrian revolution began, Glass said, his contacts in the opposition told him they were determined to keep the movement nonviolent, “to use a strategy the regime couldn’t cope with”: mass civil disobedience and general strikes. “It might have failed, but it would not have led to 250,000 dead and half the country homeless.”

Instead, Western states and their allies in Saudi Arabia, Qatar and Turkey “persuaded members of opposition to take up arms, and turn peaceful demonstrations in a civil war.”

Glass described the spread of violent sectarianism in Syria as a consequence of this policy. Minority Christian, Alawite and Druze contacts of Glass’ who initially participated in the peaceful, secular uprising against the Syrian regime “have been driven out of the revolution by jihadists, and forced to side with the regime just to survive.”

Despite the utter lack of political freedom in Syria before the war, Glass said, there was “social freedom,” particularly for Christians, religious minorities and women.

But if the United States and its Islamist regional allies prevail, “that means Jahbat al Nusra [al Qaeda’s Syria affiliate] wins, Syria will be religiously cleansed, and its people will be enslaved to an ideology they don’t believe in.” Alternatively, if Russia, Iran and the Syrian regime prevail, “there will be reprisals and massacres against Syrians who opposed the regime”. On the current trajectory, Glass said, the most likely outcome is not victory for either side, but “a long and bloody war with a big impact on Europe that endures as a problem in U.S. foreign policy for years to come.”

Instead, Glass argued, the two superpowers should reach a settlement on Syria, and impose a peace on the country’s warring parties, as was done in Lebanon in the 1989 Ta’if accord. “Lebanon healed very quickly, in one respect,” Glass said. “That could happen in Syria. The most urgent thing is for the outside powers that are keeping this war alive to stop.”

“There’s hope” for Syria’s multicultural society, he concluded, “unless all the Christians are driven out first.”

Glass was ABC News’ chief Middle East correspondent when he was abducted and held hostage in Lebanon for 62 days in 1987. He writes regularly for The New York Review of Books, Harper’s and The Spectator, and is the author of several books on the Levant, most recently Syria Burning: ISIS and the Death of the Arab Spring.

The full video of Glass’ talk will be posted online at www.middle-east-minorities.com. Glass’s lecture was part of a lecture series on The Future of Religious Minorities in the Middle East being held at Boston College, and sponsored by Christian Solidarity International in cooperation with the Department of Slavic & Eastern Languages & Literatures, the Boisi Center for Religion and American Public Life, and the Department of Political Science, Islamic Civilization and Societies.