John Eibner from CSI has returned this week from Syria. He travelled notably to the embattled city of Aleppo, as well as to Homs and Damascus. 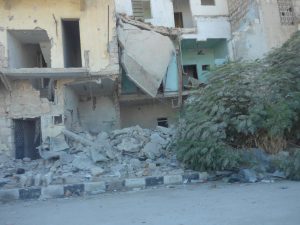 “The sanctions against Syria are worse than the barrel bombs”

“The situation of the civil population dramatically worsens,” says John Eibner, who has been traveling to Syria regularly for many years. Eibner is the CEO of the human rights organization Christian Solidarity International – USA (CSI-USA). Over the past few days, Eibner visited Homs and Tartus, where CSI supports humanitarian projects. He also traveled for the first time to Aleppo, where the human rights organization is also now active.

This metropolis in northern Syria is a focal point in the Civil War that has been raging for over five years. Aleppo has long been split into two parts: Bashar al-Assad’s army controls western Aleppo, while various rebel groups control the eastern part of the city. For several weeks, Assad’s army has besieged eastern Aleppo. “The besieging troops are tightening the noose around eastern Aleppo,” explains Eibner, who was in western Aleppo from last Saturday to Tuesday. The 10 hour bus journey to Aleppo led past many government-controlled checkpoints. Thanks to a letter from a local partner, he could reach Aleppo without obstruction.

Eibner was, however, unable to reach the embattled part of eastern Aleppo. From a hill in the west he overlooked the largely destroyed east. While on the ground, he neither heard air strikes, nor could he observe heavy fighting. He learned about the Syrian army’s alleged chlorine gas attack in the quarter of al-Sukkari in the BBC news. 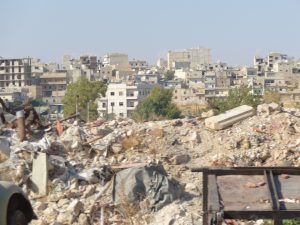 “One has to be careful with such reports, as long as they have not been confirmed by independent sources,” Eibner states.

Opponents of the Assad regime in Aleppo are faced with increasing pressure. This has been confirmed by the government’s official Syrian Arab News Agency (SANA), but also by media belonging to the opposition, such as the British-based Syrian Observatory for Human Rights.  A few days ago, regime forces seized a supply corridor from the rebels. The rebels can no longer deliver weapons, food and other supplies to their parts of Aleppo. They claimed that they withdrew because of intense Russian airstrikes, and because of foreign fighters – mainly Shiite militias – supporting the army.

According to CSI’s John Eibner, there are still around 175,000 civilians trapped in eastern Aleppo. He heard that the rebels keep them from leaving the embattled east. Whether this is true, he cannot say. Eibner assumes that the food supply is increasingly threatened, but is not aware of a starvation crisis. Food aid deliveries of the United Nations World Food Program (WFP) have not been able to reach eastern Aleppo for weeks. The situation in western Aleppo is significantly better. [Unlike in the religiously-cleansed, Islamist-dominated eastern part of Aleppo, broad social pluralism prevails in the government-controlled west, with Sunnis, Shiites, Christians and non-religious secularists coexisting openly and peacefully. – Ed.] 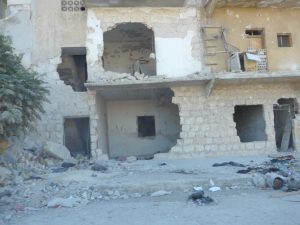 Refugees due to economic hardship

Aid deliveries reach western Aleppo and food is available on the markets, Eibner points out. “I do not have the impression that people are starving here.” It is, however, deeply disturbing to see how many people are dependent on humanitarian aid, he adds. Eibner explains that many people forcibly displaced by war have come to western Aleppo for sanctuary. Many are destitute people from the eastern part of the city and its surroundings.

During his travels to Syria, Eibner is not only interested in how CSI projects progress, or in the situation of Christians and other religious minorities in the region. He also investigates the consequences of sanctions against the Assad regime and their impact on the civilian population. In 2011 both the US and the EU called for economic sanctions against Syria. “Sanctions never affect the powerful, they always find a way out,” Eibner says. “The sanctions against the Assad regime catastrophically harm the ordinary people.”

Civilians lose their economic resources, the country descends into poverty. “These sanctions are weapons of war. It could be that they cause more death and destruction than the barrel bombs and bullets that dominate the headlines,” Eibner states. He adds that the miserable living conditions caused by the sanctions are a major factor in the mass flight of displaced Syrians to neighboring countries and to Europe.

At the end of August, the three Christian Patriarchs of Damascus – John X, Ignatius Aphrem II, and Gregorius III – made a dramatic appeal to the West: “Stop the siege on the Syrian People! Lift the International Sanctions on Syria!”